Vanessa LaFontaine is a Canadian model that was Cameron's imaginary crush-girlfriend in fANTasy girl. She was known as Jeanne Gossamer, but Cameron found out her actual name is Vanessa LaFontaine. She eventually became Cameron's actual girlfriend after Chyna brought them together. She was a recurring character in the second season and is portrayed by Vanessa Morgan. She and Cameron broke up because of a misunderstanding.

Vanessa made her first appearance in fANTasy Girl under the name Jeanne Gossamer. Cameron imagined her up after looking at a clothing catalog that Lexi was reading that was called Gossamer Jeans. Vanessa modeled the front cover. In his imagination, Cameron asks her to the school dance, and Jeanne was always seen with him, and at the school dance, they take several pictures together and dance. Cameron soon figured out that he only made up Jeanne "like some kind of looney bird" because he didn't want to accept the fact that he wouldn't have a date.

In Modeling AssignmANT, Chyna helps Cameron and tracks down Vanessa. After they learn that Vanessa had eye surgery and has bandages on her eyes, the two of them take advantage of that and do everything they can to make her fall in love with Cameron, so Chyna pretends to be a modeling agent that hires Vanessa while Cameron pretends to be a male model. When Vanessa gets her bandages taken off and learns the truth, she told Cameron that no one had ever gone through that much trouble just to impress her and that she found his attempts to impress her to be romantic. The two of them then go out together and get to know each other better.

In ANTswers, it becomes official that Vanessa and Cameron started dating, while Lexi gets jealous of the couple and tells Cameron that Vanessa might be an alien. Lexi was proven to be true when Vanessa admitted she was an alien after agreeing to model for Hippo's new restaurant, but she meant that she was from Canada, rather than outer space.

In The ANTagonist, Vanessa tags along with Cameron to 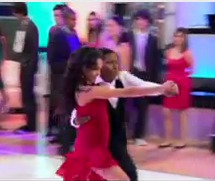 several school clubs that are made up of only girls because Cameron is afraid of losing Vanessa to men that are better than him. In the end, Vanessa gets the wrong impression and assumes that Cameron was joining all the girl clubs to meet other girls. When Vanessa dumps Cameron, she says that he was only interested in multiple girls and walked out of the girls' club they were in. Cameron never saw her again.

Retrieved from "https://antfarm.fandom.com/wiki/Vanessa_LaFontaine?oldid=195501"
Community content is available under CC-BY-SA unless otherwise noted.