Olive Daphne Doyle is one of the two main deuteragonists of the Disney Channel Series "A.N.T. Farm (the other one is Fletcher). Olive has an eidetic memory, meaning she remembers everything from what she sees to what she reads. She had become part of the A.N.T. Program a little before Chyna Parks arrives, who she quickly becomes best friends with. Olive is portrayed by Sierra McCormick. 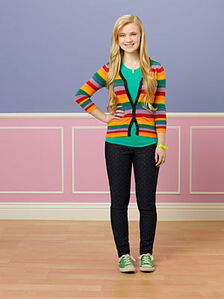 Olive is a human computer who remembers everything. Olive is an awkward girl but as the series went on, she became more tough and confident and helps Chyna through everything. Olive's unique mind can sometimes overpower he ability to empathise with others, giving her the appearance of being an insensitive girl. Sometimes she could be a know it all and self-centered sometimes like Lexi but never lets her ego rule her. She loves her best friends.

Olive was the first A.N.T. to talk to Chyna on her first day and instantly became best friends. Chyna will do anything to help Olive out, and Olive would do the same. On Season 3, they become roommates and get even more closer than in the past seasons. They get along with each other as they have only had fights in four episodes. (see Cholive).

Olive and Fletcher are best friends, but they often have quarrels and insult each other, in which Olive saying "I tease him because I love him" about Fletcher insinuating their love/hate relationship. Though many might think of Fletcher and Olive's friendship as on/off, they have been shown to care about each other all throughout the series. The two are also known as opposites. They have many differences that it seems impossible for them to work together. But for these two, they seem to make it work. They put their differences aside and help each other out. In unwANTed when Dixon dumped Olive for another girl, Fletcher comforted her and told her she was not alone and he was always be there for her. At the end of the episode, Fletcher kissed Olive on the cheek and they officially became a couple. They broke up in the series finale so Fletcher could stay in New York as an art resident. (see: Folive).

Olive and Lexi do not appear to be very fond of each other. Lexi tends to use Olive a lot like when she turned in Olive's cheer, which was filled with facts, as her report and when she tricks her into cleaning places so Lexi could earn money by telling her it's math. Also, she uses Olive by pretending to be nice to her just so she could get on the front cover of the school newspaper. Olive is scared of Lexi and respects her position in the school's hierarchy. Lexi is very friendly towards Olive so that she can get on the cover of the school paper. During this time, Olive seems to stand up to Lexi a bit more. While never becoming firm friends, they do start to get along a little better after Lexi reveals her own Advanced Natural Talent. (see Lolive).

Olive and Cameron are locker neighbors. They've only appeared to be talking to each other when Chyna arrives, but it's possible they've encountered before that since they were still going to the same school. Cameron says he thinks Olive is annoying. However, Olive appears to like Cameron as a friend and has a very positive attitude towards him. (see Colive).

Angus has a crush on Olive, yet she doesn't feel the same way. Angus seems very protective of Olive and tries to do whatever it takes for Olive to date him. An example of that is when Olive was flirting with Keith, Angus hit him with his wheelchair in ClairvoyANT. Angus also wrote a song for Olive called Date Me in the episode SignificANT Other. This backfires as Olive throws a soda in his eyes. (see: Angive).

Olive and Paisley seem to be friends. Olive is worried when Paisley chokes on a meatball. Olive wants to interview Paisley for an article in the school paper. Paisley seems to like Olive, as she is very friendly towards her. They are partners on a game show in L.A in America Needs TalANT.They also room together. In the episode IntelligANT Olive seeks dumb lessons from Paisley and tries to act just like her.

Starting in secret agANT, Dixon came to the A.N.T. School. Chyna and Lexi immediately like him, although at the end, Dixon chooses a surprising Olive. He claims that she is just his type. Then, in PANTs on fire, they are shown to still be together. Olive is seen asking him for a top-secret salad dressing, which he gives to her even though he specifically said it's dangerous. He seems to want to give her up for anything. In Product misplacemANT they were still dating because they were talking on the phone with each other. In the episode unwANTed, Dixon breaks up with Olive for another girl, leaving her upset. (see: Dilive).

Retrieved from "https://antfarm.fandom.com/wiki/Olive_Doyle?oldid=196712"
Community content is available under CC-BY-SA unless otherwise noted.